I favorited a tweet last week about The Vampire Diaries. One of my tweeps observed that Elena—who’s a vampire—was carrying water on her hike, asking, “Why are you carrying water, Elena? Do you drink water?”

I laughed when I read it and was like, hehe, I noticed that too—go us! But then a few days later I read Dalton Ross’s article in this week’s EW: "How We Transformed Into Nitpick Nation.” Ross points out that we don’t just watch TV anymore, we nitpick: our fingers are on constant alert poised over our keyboards, ready to point out the next gaffe or implausible scenario.

He’s not wrong. I mean, I was feeling all smug about noticing that a vampire doesn’t need water, and feeling a sense of community that I wasn’t the only one. Meanwhile both of us clearly watch a show every week that’s about not only teenage vampires but also werewolves and the only reason Elena was hiking in the first place is that all the characters are currently on some ridiculous nature quest LOOKING FOR A MYSTICAL CURE FOR VAMPIRISM.

Why isn’t that the part that bothered me?
I could go all smarty pants and claim that I’ve engaged in what Coleridge called the willing suspension of disbelief in order to enjoy the story. And I could claim that the audience has a right to expect that the writers will adhere to self-consistent rules within the confines of the crack-smoking crazy universe they’ve created. That’s great and all, but I’m afraid it still doesn’t change the fact that Ross is right—I’m part of Nitpick Nation.

I think nitpicking probably goes with obsessive fandom like soup with crackers. First, if you watch something more than once, you’re going to notice little stuff. If you make your hobby splicing scenes into gifs, you’re going to notice even more. And then there’s the fact of the online forum. In Olden Times, when we might have discussed our favorite shows in person at school or work the next day, it was perfectly acceptable to rehash major plot points. But by the time you log on to Tumblr, the major stuff will likely already have been covered. We all want to contribute something new to the conversation. So we need to look closer. It becomes important whether or not our characters are carrying logical beverage choices. For example.

Ross also points out in his article that entertainment used to be viewed as disposable. We were watching a movie on the National Film Registry in my Media Studies class last week. One of the archivists mentioned that one major studio actually threw away all their silent films in the fifties, because there was no thought that anyone would ever want to see them again. Imagine the idiot who made this decision in a room full of modern-day film history buffs. They’d tear the poor dude into pieces. Today, we watch and re-watch. We buy blu-rays, we download. The notion that a given piece of entertainment is only designed to fill one hour of airtime, and then never be viewed again is a thing of the past. This truth makes programs such as Buckwild or Dance Moms more difficult to understand.

But maybe no matter how much we nitpick, some mysteries just can’t be solved. 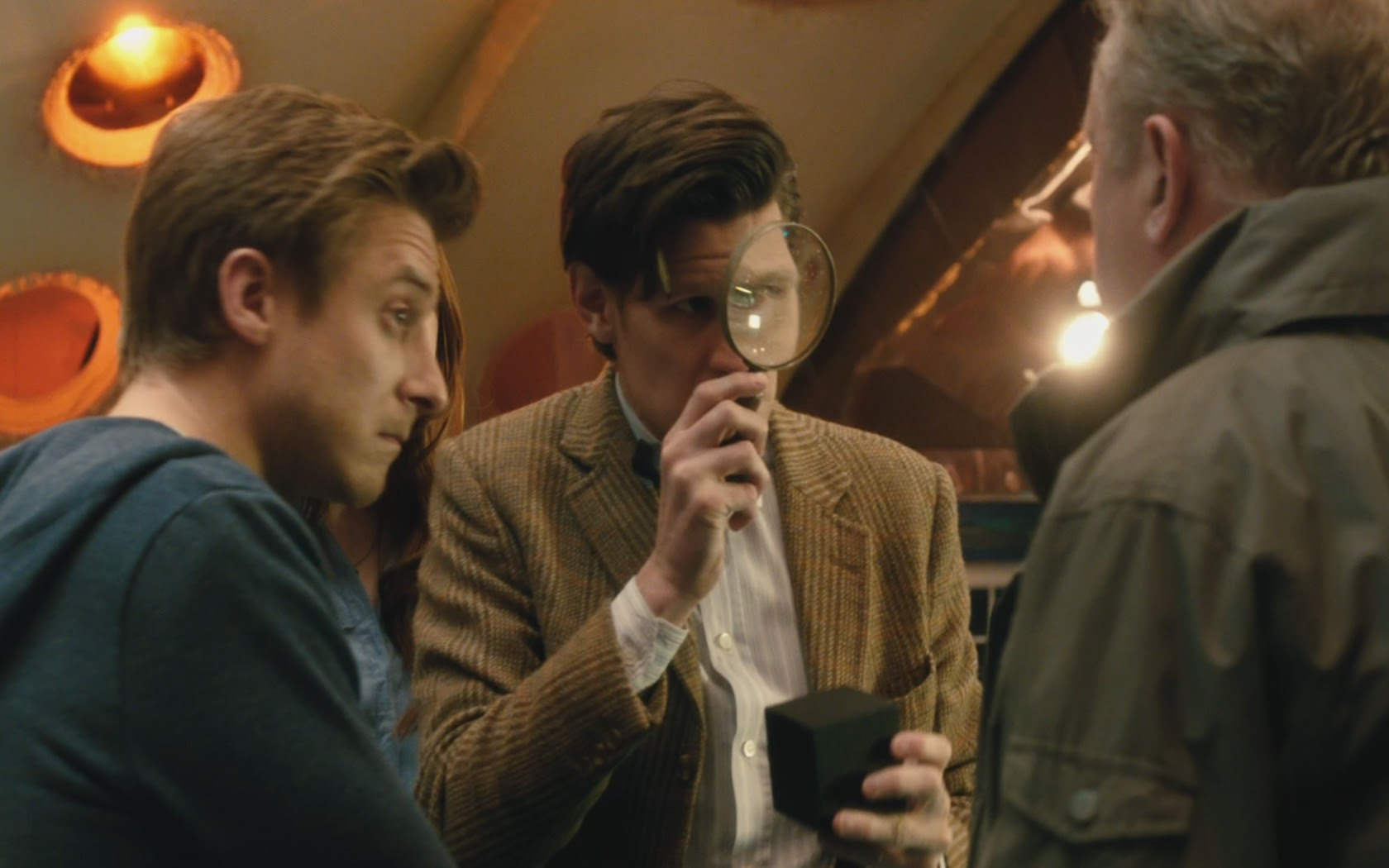 I have this problem in which my favorite characters are all bad boys.

Every time I re-read Wuthering Heights, I’m rooting for Heathcliff. He’s not a good guy. It shouldn’t really matter how much he loves Cathy. Mr. Rochester, Hamlet—all my favorite books are filled with jerks whom I can’t help but love.

Maybe it’s that storybook (or TV or movie) love is interesting because of the conflict, and nobody causes more trouble than a bad boy. Buffy said it best (in one of my favorite episodes, season 4’s “Something Blue”)

“I know it's nuts, but part of me believes that real love and passion have to go hand-in-hand with pain and fighting.”

She then turns and stakes a vamp and wonders where she got that idea…But for the rest of us, who lead a vamp-dusting free existence, where does that idea come from? In my AP class we’ve been talking a lot about the ultimate bad guy: Milton’s Lucifer.

First of all, poor Milton. I feel bad for the guy. Yes, he achieved immortality with his work. But he was a Puritan who set out to justify the ways of God to man. The fact that the Romantics of the nineteenth century embraced his Satan as an (anti-)hero would likely have upset him. A lot. I would actually argue that we’re still a Romantic era—after centuries cycling through alternating eras of reason and romance, we're probably stuck now. Reason is no longer strictly necessary. Instead, we have Google. Instant gratification (usually emotional) is what we want now.

So if we’re making a choice of favorite characters with our feelings instead of our brains, it’s bad boys all the way. It’s just not that much fun to root for the good guy. If you watch The Vampire Diaries, like I do, you probably root for bad-brother Damon rather than grim, self-righteous Stefan (if you’re a fellow TVD fan, are you feeling my pain over this protracted Professor and The Cure bit? Ugh).

Bad boys are more compelling for lots of reasons. One: cross them and they’ll get revenge. Milton’s Lucifer’s first speech promises vengeance, “All is not lost; the unconquerable will/And study of revenge, immortal hate/And courage never to submit or yield”

If you think about it, a lot of our favorite bad boys have Miltonian DNA. They are often outcasts—usually by choice. They want their freedom and will do almost anything to get it. They’re smooth talkers. These characters show up and steal the show—it happens over and over. The narrator of Gossip Girl in the early days was good-guy Dan. Snore. Bad-boy Chuck Bass was the character we tuned back in to see.

Maybe it’s the possibility of redemption that brings us back for more of the bad boys. It’s more satisfying to watch Chuck struggle to become a better man than it is to wait for Dan’s inevitable misstep, to be followed by his also-inevitable self-recrimination-filled moping.

Romantic-era writer and bad girl Lady Caroline Lamb probably summed up the bad boy’s appeal best with her famous description of Lord Byron: mad, bad, and dangerous to know. Swoon!
Would I want to actually deal with one of these mad, bad, dangerous dudes in real life? That’d be a no. But when it comes time to escape into a book or a show, bring on the bad boys.
Posted by J.J. Howard at 6:19 AM 2 comments: 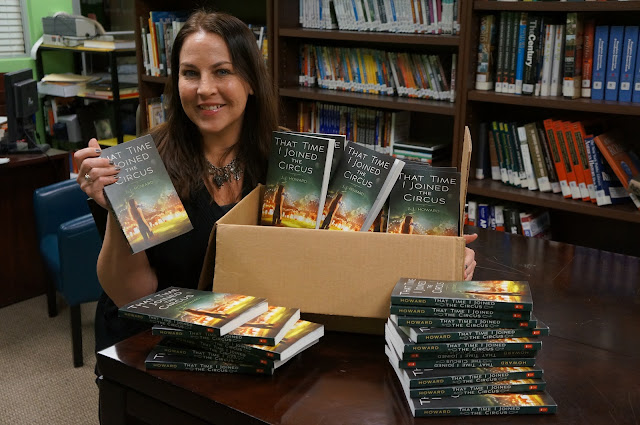 That Time I Joined the Circus arrives at my school’s book fair!

It’s load-in day at my school…the circus has arrived!

I wasn’t sure if the book would be out in the Scholastic Book Fairs before its hardcover release this April 1. But here it is! My friend in our high school library Michele cracked open one of the boxes and we set them all up, and then she snapped my picture. It’s so amazing/crazy (cramazing?) to see something that started as an MS Word doc on my laptop turn into forty-eight individual, shiny new books. Still can’t wait for the hardcover release, but so excited that the book fair version has finally arrived at my school. Some of my students have been hearing me talk about this project since their freshman year, and now they’re seniors! It’s been a long trip…can’t wait to take the next step in this crazy circus trip ;}
Posted by J.J. Howard at 12:41 PM 4 comments: