I just finished torturing my freshmen with Romeo and Juliet. I say torture, but a lot of them loved acting out the first scene and learning to stage fight. Some of them didn’t even seem to mind learning about poetry. A handful of them cried when we watched the final scene of the Baz Luhrman movie.

But this year, for the first time since 1996, I had a few students wondering why we were watching the “old” movie.
Now I’ll just let the whole 1996-equals-old business go, and focus instead on the shiny new Romeo and Juliet flick these girls told me about. It came out last year. I’ve seen the trailer a few times.

The thing is, this movie doesn’t really seem all that different from the 1968 Zefferelli version: Romeo is still way too pretty—seriously, you could cut glass on this kid’s cheekbones. In common with the also very pretty Leonard Whiting from the classic flick (who, incidentally, is a dead ringer for Zac Effron—see the proof below), this handsome lad seems to have been selected more for his facility with hair gel and eye sparkle than emoting in iambic pentameter. But, I admit, I only watched the trailer. That’s right, I couldn’t get past the three-minute mark. Because what they seem to have done is, they CHANGED ALL THE WORDS. 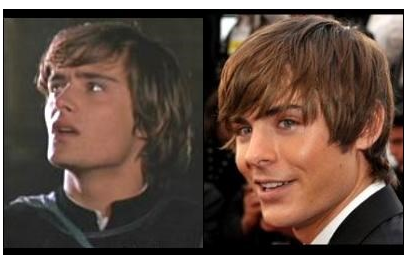 When I realized this while showing the trailer to class, one of my students was like, it’s okay, Ms. H—the story’s still the same. And then I freaked out more, because the story itself is actually pretty stupid. For example, our heroes were apparently too dense to figure out that a rope ladder can actually be used to transport more than one person. Everybody knows Shakespeare copied most of his stories anyway. It’s the language that makes this play, and all his others, beautiful and memorable.

But based on what I've seen, this version seems to have eviscerated the play. For one, some lady at the Capulet ball plays Commander Obvious, and explains, for those too dense to grasp this complex, world- famous story that, “Juliet is a Capulet. The  Montagues and the Capulets are MORTAL ENEMIES.”

Oh, good. Because almost nobody has heard of this play, so let’s just make it EXTRA clear.

Then, I guess after he’s murdered Tybalt and all that, Romeo kneels in a church and says,
"What have I done? I've murdered my tomorrow!"

What’s that, Cheekbones? You murdered your tomorrow? Is that what you did? Because nowhere in the play, or anywhere else in Shakespeare that I know of, does anybody murder a tomorrow. This screenwriter has some major cajones: it’s one thing to simplify Shakespeare. It’s quite another to try to out-poetry him. Especially with a line like that.

Some folks may say I’m being too big of a fancy-pants here. But here’s the thing—I love the 1996 version, and not just because Leo DiCaprio can seriously act. It’s modern, and trashy, and not really highbrow at all.* But they kept what was special about the play—the words. It’s worth noting that the cheapest tickets to Elizabethan theatrical performances also offered the best view, right up by the stage. The best seats were in the gallery, which afforded a better chance to hear the words. Today, the best seat in the house is always about being the one with the best view. We make everything look good, but sometimes forget there's more to life.

I don’t care if you act out Shakespeare’s plays in a modernized Hollywood movie or in your backyard—it doesn’t matter what it looks like—it’s still poetry.

*I have more piece of evidence of my lack of snobbery—if I do end up seeing this new movie, it will be entirely because Ed Westwick of Gossip Girl is in it as Tybalt. I XOXO that guy. 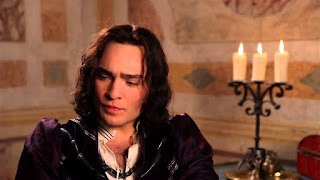