We live in a world in which contains not only a show called Toddlers and Tiaras—but also a spin-off of that show, called Here Comes Honey Boo Boo. I’ve never seen it, but I read about it in Entertainment Weekly the other day. It turns out this show is subtitled. The “cast” members speak English. And yet.

Now, the thing is, I’m not an entertainment snob. As previously mentioned here, I unabashedly enjoy several of ABC Family’s shows, including one that features Denise Richards as a cast member. Her acting is not the best, but her part on Twisted as a trophy widow is at least less of a stretch than her role in that James Bond film in which she was cast as some sort of nuclear scientist. But then again, I’m just being silly. That movie was a long time ago, when Denise was much younger, and everyone knows that nuclear scientists are almost always hot girls in their twenties. But now, alas, it’s mom roles for Denise.
But back to the Boo-Boo, the idea of subtitling our mother tongue disturbs me on a number of levels. I feel strongly that we should all agree on a language and speak it intelligibly enough so that at least native speakers can make sense of the words. The fact that these folks need subtitles is also evidence that the primary goal of this program is to make fun of this family.


I realize they are willing participants. For a lot of people today, fame (or infamy) and money are sufficient incentives to trade in their dignity. And their children’s dignity (and normalcy, and privacy—the list goes on). Adults, though, can make an informed decision about whether or not to televise their lives. How could a little kid understand what they were signing up for—or giving up?
There are those who would blame the audience, the old “if no one watched it they wouldn’t make it” routine. And maybe they’re right. But the very fact that we feel the need to assign blame for a show like this tells us just how bad it probably is.

We live a media-saturated world, so it probably shouldn’t come as much of a surprise that some families are choosing to embrace the saturation to the fullest by living on TV. This past week the Royal Baby was born and a good chunk of Americans devoted a good chunk of their time to watching and waiting for it, and commenting after. I wonder what our forefathers would think. We did fight pretty hard to not have a prince or a king. A high percentage of folks in the UK don’t want one anymore either, yet the entire country nearly ground to a halt waiting to find out the gender and name of their next little prince. The fact is, baby princes make a good story. And, apparently, so do tiara-wearing former toddlers who mumble.

In a less crazy world, leaders would be selected based on merit—and so would television stars. And nuclear scientists. But it’s a wacky world out there. Better redneckonize.
Posted by J.J. Howard at 6:43 AM No comments:

I was on Twitter the other day, spending my time in a productive manner, and I followed a link about the new New Adult genre, and somehow that led me down a rabbit hole about the success these poor, confused millennials are having peddling stories about their technology addictions, crummy relationships, and general malaise. There’s a blog called “$%&# I’m in my Twenties,” and its author just landed herself a book deal based on her creative Tumblr posting.

I could take it as encouraging that there is a whole new market cropping up to bridge the gap between stories written for kids, and adult books and shows.  It might be nice to read a YA-style book with a protagonist who can vote, or start to watch a fun new TV show in which the main characters are not all in the tenth grade.

On the other hand, when I watch Lena Dunham’s Girls, my old gen-X self is thinking, what is wrong with these people? First of all, being in your twenties is not cause for profanity and moping. We live in a youth-worshipping culture. Yes, the economy is pretty terrible, but, news flash, when we Gen X-ers got out of college, things weren’t that much better. The main difference is that there were fewer situations in which an experienced Old Person would lose their job to a someone much younger. Today, lots of companies are looking for millennials who are social-media savvy and plugged in to what’s hip. Also, no one was giving twenty-somethings their own shows on HBO back in the day. For example.

I’d like to start my own blog called “Crap, I’m in my Forties.” I’d have to say “crap” or “darn,” because I’m a teacher, and I can’t be posting the kind of profanity the Twenties girl throws around. Come to think, it also wouldn't  be appropriate for me to be posting about crummy relationships, which leaves me with my technology addiction and general malaise. And nobody wants to hear about that from someone who’s forty. That’s the thing: like Dunham’s Girls, in your twenties, you’ve got some leeway to say and do dumb things, and wear extraordinarily ugly “vintage” clothes. Somewhere after the thirty-mark, behavior—and wardrobe—that seemed quirky or eccentric becomes just sad, or downright strange. Maybe that’s the main reason these folks need their own genre. Your twenties are a different world: you’re not a kid anymore, but you’re sure as hell not completely one of us boring grown-ups yet either.

I’d tell that blogger girl to stop swearing and moping about being twenty-something, but it seems like she’s doing all right for herself. She’s probably having a cocktail with Lena Dunham right now, wearing a weird hat.

It's a brave new world for those folks. Darn, I’m not in my twenties—actually, on second thought, I’m good. I do wish them luck, but I’ll be content to read all about it.
Posted by J.J. Howard at 1:00 AM 1 comment:

10. It really is the little things.

Kaylee from Firefly was intensely happy about that box of strawberries that Book brought on board. Same goes for the mega-ruffled dress and the hot cheese at the party in “Shindig.” She’s got crap-all for creature comforts on board Serenity, but she makes the most of the few she does have. A lot of times you can’t control the big stuff in life—like being arrested as a space pirate. But you can make the most of the little things and enjoy life anyway. 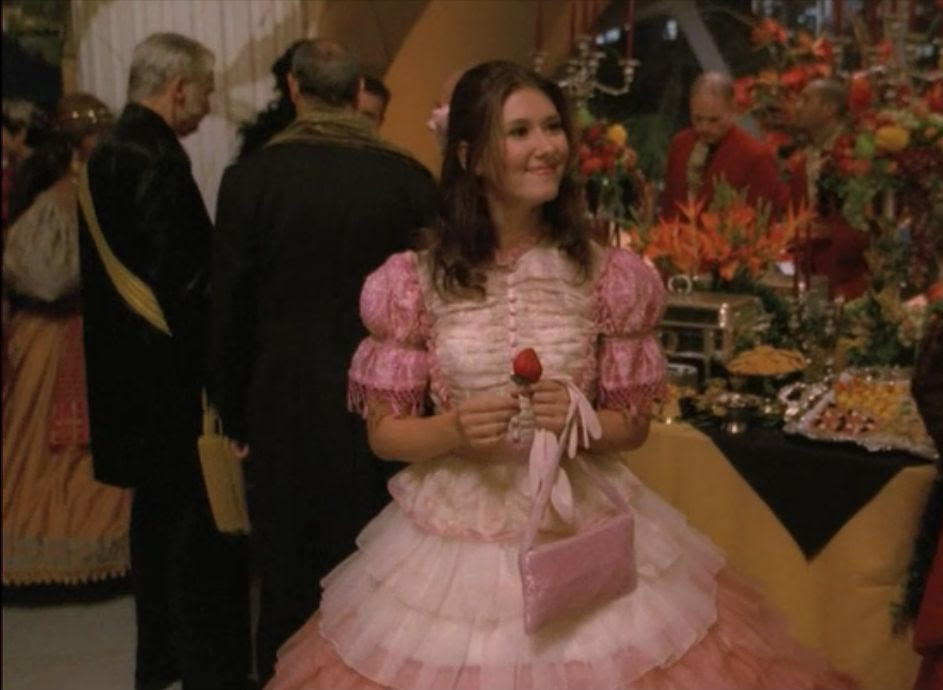 9. Don’t ever let anyone erase your personality and memory and store it in their sketchy corporate offices like they do in Dollhouse.

This one seems pretty self-evident, but, you know—still good advice in case they ever do invent this tech.
(However: would we remember if they had?)

8. Beware the power of the dark side.

Willow fails to heed this advice in season 6 of Buffy, and she goes Dark Willow in a major way. I’m not sure she ever truly recovers from the terrible things she did. Willow’s experiences also show how important it can be to surround yourself with people who bring out the good parts of you—not the bad. Former rat Amy was a decidedly bad influence on the magic-addict. If she’d stayed in her little wheel things may have gone very differently, and Will wouldn’t have had to worry about those pesky dark magic roots in her hair.

Oh, Fred. You had to open that stupid crate. And then you got killed and possessed by a socially awkward blue demon. Sometimes it’s best to just leave the bad stuff buried.

On each show, the compulsive truth-teller made a bad end: Cordelia on Angel, Anya on Buffy...Spike became the one who always spoke his mind on the final season of Angel, and then he got dusted (though that was technically on Buffy). I can’t actually remember anyone telling the truth all that much on Dollhouse, though. It might have had something to do with all the brain-wiping going on.

5. Be nice to your boss (and co-workers)

This one’s from all the shows: for example, it seems like the funnest folks all got invited to go make a fun Shakespeare comedy at Joss’s house. Epic!

4. Sometimes you can make a whole lot out of a little chance.

This one’s backstage too: James Marsters was only a guest star for an episode or two, but he so rocked it as Spike that he made an entire career out of it. Extremely epic!

3. Think outside the box.

Buffy solves her final, seemingly unsolvable challenge, by doing just that: she releases the Slayer magic-dust or what-have-you to all the girls with the potential to kick vampire ass. All the other slayers seem to have been thinking too small: patrol, stake, repeat. But being an innovator has its advantages.

2. Running away is a short-term solution.

On all the shows, the main character tried to outrun his or her past, tried to leave and start over, but their past always caught up: Buffy tried to quit several times, and even suffered at least two mental breaks trying to escape being the Slayer. She tried to go to college and be a normal girl. The universe responded by sending her the source of all evil and then her town was sucked into hell. Mal tried to run away from all responsibility, only to accidentally adopt a heaping load of it when he let himself have a soft spot for River. Angel ran to L.A. but his past kept catching up. And Echo was only born because Caroline was running away from who she was—and wow did that not end very well.

1. You can make your own family.

This happens on all his shows, really—often the characters didn’t have families, or were running away from them for various reasons. But they made their own, and stuck by those folks through thick and thin--and sometimes even hell and back.

*or, I’m not at Comic-Con—AGAIN—which really sucks