I guess because it’s May—the end of the school year, and the end of the regular TV season—but I’ve been thinking about endings. I watched the season finale of my current favorite, Doctor Who, this past week, and as the episode ended (right after I yelled the name of the exec producer: Moffattttt!!!!!! Captain-Kirk style, and scared my dog) I was left with way more questions than answers. I hopped online, but the rest of cyberspace seemed to be just as confused as me. A lot of folks have theories, but none of us will know if we’re on the right track until November. Which seems like such a long time to wait.

I have a love-hate relationship with cliffhangers and open endings. On the one hand, I hate waiting and not knowing. But on the other, how often in life do all the loose ends really get tied up? People are always talking about closure, but a lot of times we have to just move on without it. In an episode of The Big Bang Theory the other week, Sheldon freaked out when Leonard casually mentioned that Alphas was cancelled, calling the SyFy channel in a panic because he had to know what happened to the characters, and saying,

“They have to help the viewers let go. Firefly did a movie to wrap things up. Buffy the Vampire Slayer continued on as a comic book. Heroes gradually lowered the quality season by season until we were grateful it ended.”
I’ve been mourning the untimely death of Firefly since 2003, but this past year at the ten-year anniversary, one of the showrunners, Tim Minear, described his and Joss Whedon’s plans for the series—a horrific story about Inara that I’m glad I never got to/had to see.  The closure I thought I wanted might have retroactively ruined the show for me, the way a bad ending sometimes can.

When a series is caught unaware, and there’s crap-all for resolution, it is really annoying. But I think it’s even worse when the writers do know, and they fail to deliver a real ending. Of course, endings, just like every other part of the story, are in the eye of the beholder. But for most of us, when we love characters, seeing them happy and at least on their way toward what they want in life is hard to not like. A decent ending can make up for a lot—Roswell, for example: the third season was a hot mess. But the final ten minutes or so saw the whole gang together, Max and Liz married, and a happy song played as they all drove off in the distance. And though we were all worried about Harry's fate, J.K. gave us all a lovely epilogue with a happy Harry and company.

It’s not just alien and wizard teens who want to be happy and on the right path, though—it’s what we all want. In fantasy and SF stories, the writers can always pull a rabbit out of their hat and fix things for the characters. Part of why I was so confused about the final Doctor Who ep is because there are sort of twelve of him. In the real world there’s only one of each of us. Sometimes we feel like we’re on that right path, but how can we ever really know? The stories that are the most true to life don’t offer that much closure.

A contemporary novel has to have a last page, but does it have to have an ending? Think about Holden Caulfield at the end of The Catcher in the Rye. We sort of hope he’s on his way--that he'll go to a new school, make friends, get good grades--but we'll never really know. In a way the lack of clear resolution keeps Holden pure: he never becomes something else at the end of the story, so he’ll forever be that boy watching his little sister going around and around on the carousel.
There's no grand final curtain—at least while you’re still alive and kicking. Joss Whedon said it best this past week on Twitter: a follower tweeted that his life would be complete if @jossactual retweeted him. The reply: No, your life will be complete when you die.

At least I think it was Joss—this being real life, I’ll probably never know for sure.

Email ThisBlogThis!Share to TwitterShare to FacebookShare to Pinterest
Labels: 2013 debuts, Alphas, contemporary YA, doctor who, Firefly, jj howard, joss whedon., Roswell, The Big Bang Theory, The Catcher in the Rye, TV, YA Lit

Thanks Game of Thrones. Now it’s super awkward: I have to like/root for a character who pushed a little boy off the top of a tower without a second thought.

Is it possible that an actual human could change this much? To go from extreme selfish bastard to the kind of guy who’d jump, one-handed and unarmed, into a bear pit? This moment got me thinking about the way long running series tend to try to redeem the irredeemable character.
IRL, if someone rips the heart out of guy’s chest—like Damon on The Vampire Diaries—it’s not okay. But then again, there are no vampires—or werewolves—in real life. So maybe when you’re dealing with the supernatural, all bets are off. This rule would allow Game of Thrones to turn Jamie Lannister into a super nice guy. Or a white walker, or possibly even a dragon. The only really important rule in fantasy is that everyone must have some sort of accent, preferably British.

Actual people are a whole different story. A few years ago I was clearing out my old room, sifting through the detritus of my childhood: cassette tapes by the hundreds, an alarming number of stuffed animals—and then I found my fifth grade journal. Soon after finding it, I had no choice but to destroy the thing—because it was far too revealing of the fact that my personality from fifth grade to now is essentially the same. True, there are loads of surface changes. I can drive, I’m not freakishly shy. I’m much taller. But in essentials, I fear, I am very much as I was at ten.

Maybe people only change significantly when they go through something extremely drastic. Or when something gets chopped off. I did undergo a tragic perm my senior year of high school which led to a substantial amount of hair breakage, but that’s probably not the same thing. Characters in books and shows tend to have to deal with a lot worse than bad hair decisions. Maybe life-altering events can change the essential nature of a person. Or maybe not. But it sure does make for compelling TV. It’s also easier to forgive the cute ones, who always seem end up cast as the bastards with-a-secret-heart-of-gold. I, for one, fall for it every time. Even though I’ve stayed the same, I love a good transformation story.
Posted by J.J. Howard at 6:47 AM No comments:

The other week I, along with many others, stumbled across one of the many stories that accompanied the release of Gwyneth Paltrow’s new cookbook: I’m Better at Eating Than You. It’s not actually called that, unfortunately—it’s actually called, “It’s All Good,” which seems like the wrong name for a couple of reasons. One, that’s a phrase usually uttered by folks who genuinely don’t care whether the wings they ordered come out mild or spicy, or if the beer is room temperature. “It’s all good,” those folks say. And we believe them. These are not the type of people who specify that they want not salt but coarse Mediterranean sea salt. 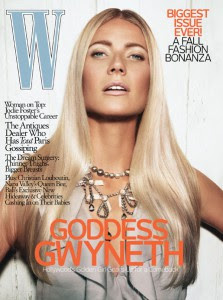 The second reason this name is just weird is that according to Gwynnie—it most certainly is NOT all good. Some of the stuff on her no-fly food list includes: coffee, eggs, shellfish, potatoes, tomatoes, corn, wheat, meat, and sugar. @%$#! Potatoes?! Coffee?! Sugar?! Her no list includes my entire diet except for chicken, incidentally.

The stylish and stick-like actress has taken a lot of heat for the book, in which she shares the gluten-free vegan-organic recipes she uses at home. She’s been accused of being out of touch with regular folks who don’t have the money (or time) to acquire some kind of fancy honey that runs twenty-five bucks a jar, but which Gwyn insists is the best. Yahoo Shine blogger Beth Greenfield figured out that a day of her recipes would cost hundreds of dollars to make for a family of four.

Of course she’s out of touch with regular folks, though. Her father was a film director and her mother’s a famous actress. She never mastered the art of existing solely on ramen noodles (forget the no-carb diet—raise your hand if you’ve ever been stuck with the ALL carb diet!). Guarantee her parents never took her “furniture shopping” on large-item pick up day. The only tawdry experience she’s likely had to endure was Shallow Hal.

I don’t hate her for being out of touch, or for having skinny genes. But I can also sort of see why her whole lifestyle brand-situation rankles some people. The text of a book like this one urges the reader to be better—but the subtext is: the choices you are making now are wrong.

As a one of those regular folks, I can tell you on a good day, I manage to not go to Chipotle for dinner. And don’t get me started on lunch. The other day during lunch period, while grading papers, I ate a remarkable collection of crap including, but not limited to, a stack of Pringles and some of the candy I keep in my desk to use for prizes. Sometimes it’s hard to get through a ridiculously busy day, let alone Be Your Best Self. So even when I’m trying to do better—like I’ve been trying to stay away from soda for the past month or so—I still tend to scoff at people who say they get up at five am to juice, or who’d go to a raw food restaurant on purpose.

The other night on Bill Maher guest Jimmy Kimmel talked about Paltrow. He said people get bent out of shape because she’s perfect, even what she eats is perfect. And yet: the book's current overall sales rank on Amazon is #11. Which just goes to show that life really is just like high school. Everybody rags on the prettiest girl in school for being a snob, and then everybody votes for her for prom queen. In such a complicated world, I suppose it’s a comfort when you realize that sometimes life is exactly like eleventh grade.