It’s not Valentine’s Day or anything, thank God, but I was inspired by a question the moderator asked one of the panels at the NYC Teen Author Festival last month. The question for these YA writers: what was their favorite type of romantic relationship to write? They came up with a bunch of the expected ones, like love at first sight, and also hate at first sight.

The thing about romance is, even if you don’t write Romance, the genre—even if you like to write about aliens or DNA splicing or magic or state-run gladiatorial games for children—a lot of the time there still ends up being at least one romantic relationship in a YA novel.

The panel got me thinking about this topic, but I owe any knowledge I may have on the subject to the huge chunk of my life wasted in front of the TV, along with my vast expertise with the Regency Romance Novel. There are about six basic Regency plots, all of them culminating in a nauseatingly romantic happy ending.

When you actually think about it, there are only a few main categories of story love—and sometimes they overlap (like Bella and Edward, for example, are not only star-crossed but also insta-love—if you count his being in love with the way her blood smelled or whatever). But here are the main ones I’ve spotted:

1) Best friend love
This was a popular one that got mentioned on the panel—someone said, “Oh, like Andy and Duckie from Pretty in Pink!, and everyone went, “Awwww.” But then the same person who said this type was their favorite was also swooning over Jordan Catalano from My So-Called Life, and I was like, if she really always rooted for the best friend, then she’d have been swooning over Brian Krakow.

City of Bones would have this kind of story if Simon had ended up with Clary. It’s not the most popular one by far—probably because the best friend isn’t usually a warrior, a bad boy, a werewolf—or any other category of intriguingly dangerous fellow.

Because meeting somebody and being like, yep, done! Calling it—it’s love! is so terribly believable. You know, ever.

3) Hate at first sight
I remember who brought this one up—my fellow New Leafer Kody Keplinger. And after I read the first few pages of her debut, The DUFF, I could certainly see why.  In this version, the pair fight until they figure out, wait—we don’t actually hate each other...

I grew up with a version of this which I’ll call The Han Solo variation. Just like Han and Leia, in this one the two don’t exactly hate each other, but they don’t quite see eye to eye. And they squabble and argue and talk over top of each other in a completely adorable way until finally: love. All my favorite 80s shows like Scarecrow and Mrs. King and Moonlighting featured the HSV. My devotion to this story type probably ruined my life, leading me to dismiss any male whose personality failed to annoy me as a non-viable option.

4) Star-crossed
This one is the bedrock of fantasy and paranormal amore. These two shouldn’t be together because of some fundamental roadblock. He’s a Montague and she’s a Capulet. She’s a human and he’s an alien. He’s the prince of a rival Faerie kingdom. He’s a vampire and she’s lunch. This is the stuff of the Epic Love Affair, the trope that launched a thousand ships (of the Tumblr variety). It works a little less well in Real Life. Possibly because there are so few faeries and vampires and Capulets.

5) Unrequited love
I love the metaphor for this one: “carrying a torch” because it sounds awkward, heavy, and like it will probably lead to at least second-degree burns, which sounds about right. I’m a complete sucker for this one, especially the Noble Governess variety. Even if you’re not into Regencies, you know the type. She’s pretty but you don’t notice her right away. She’s not as obvious as that other chick he thinks he’s into, until he gets to know the N.G. She’s smart. She’s capable. Maybe she’s got a great sense of humor. Give the guy two hundred or so pages. He may be a little slow, but eventually he’ll figure it out.

Last week’s Entertainment Weekly featured an article about a huge showdown coming this Memorial Day.
Fans of the impressive muscles and distinct gravelly growl of Vin Diesel—try not to faint. There WILL be a sixth Fast & Furious movie coming to a multiplex near you! And, the very same weekend, you can also see the third Hangover movie. Which one will moviegoers pick? This is so exciting. It’s on!

The plot of F&F is going to involve high-octane car chases. Some very attractive people will drive impossibly fast and at some point they will yell at each other. There will also be guns. I didn’t read an advance review or anything—I’m just that good at predicting things.

The plot of the original movie was wafer-thin: a boyishly handsome undercover cop tries to bust some street racers. Possibly I should be impressed that the minds behind this series have managed somehow to spin that premise into SIX films. Confession time: I’ve seen most of these. I skipped the one that had to do with sliding the cars sideways, I think in Japan.  I don’t think that one even had the original cast in it. I rather like Vin Diesel—there’s a reassuring continuity about his performances. And Paul Walker is very cute and an also an adorably bad actor, sort of like a blond, less confused-looking Keanu Reeves. The fifth fast/furious movie made it onto my Netflix cue, but I didn’t make it past the half hour mark. I’m not sure they were working from an actual script, containing, you know, plot elements. It all just seemed like a jumble of testosterone and motor oil.

And yet. Six movies, a bajillion dollars...something about that formula works. As for its release-date competitor, the first iteration of The Hangover was damn funny. It wasn’t War and Peace, but not everything has to be (thank God). I saw the second one, and my own humble opinion: I’m calling played-out on this series. But who knows—it’s really all about the story.
Memorial Day is a big weekend, and I’m sure a lot’s at stake. So the studios are going for the known quantity. I also read in the same EW about a lot of VFX studios closing. Times are tough. And they wouldn’t make this stuff if lots of someones didn’t buy it.

Formulas that work are all the rage—and probably not going anywhere. The trick may be to put a slightly new spin on something that a lot of people already like. I heard somewhere that film studios these days all want to get there second. The next—new—big thing is also a big risk. But if you can get in with a creatively knocked-off second hit, before the trend is played out, it’s all puppies and rainbows and lots and lots of money.

For the rest of us who’ll be skipping the lines for this Memorial Day’s refreshingly derivative options, at least there’s the beach. And Netflix, if it rains.
Posted by J.J. Howard at 6:19 AM No comments:

She Could Be a Farmer in Those Clothes

College has changed a lot since my day.
For posterity and all, I’ve documented the top five ways:

1. Documentation
It is apparently now required to document one’s escapades/posing ability daily on Instagram and Facebook. In some Greek organizations it seems as though it might even be mandatory. Certain sororities also appear to be very strict about the throwing up of the organization’s hand signals. Maybe they can even communicate this way when geographically separated--like lifeguards on a beach. But as I think about it, it’s probably only the social media aspect that’s new here. I can vaguely recall sophomore year a few friends who went Greek behaving very much as I imagine new cult members behave, at least for the first year or so of their membership.

2. Fancy-ness
I went to college in the era of Grunge. We wore a lot of flannel. In my senior year college portrait I’m sporting a pair of jeans paired with a denim shirt. It seemed to make sense at the time. I was also wearing big clunky boots—I look as though I’m all set for a day of spot-welding. Girls today are not all about the practical shoes. Even at my school’s eighth grade graduation, the thirteen year olds teeter to the podium in four-inch heels. I do not envy girls today. I got to walk comfortably through my twenties.  I may have looked like a lumberjack doing it, but at least I wasn’t the only one.
When I used to chaperone school dances as a young teacher, I’d be the only one in flats: I felt like Tai in Clueless when she shows up in her sensible clothes and all the Beverly Hills girls are more dressed up than her even though they’re in gym class.

3. Sticker price
I had a student a couple of years ago who applied to about nine hundred colleges (also different from my friends and I back in the day—we each applied to an average of three—but that may have been just my hometown). At any rate, she applied to my alma mater, and it was the most expensive one in her book. If it cost that much back then, I might have had to take up spot-welding on the side just to pay for it.

4. Delusion
I went all through college working hard and thinking of my future success in vague terms...I wanted to write, I thought it would be swell to create my own TV show...but I never doubted the success part. I think being a child of the eighties instilled in me a blind and unreasoned faith in my future prosperity. This unrealistic worldview combined with a recession in the mid-nineties to allow my dream of becoming a full-time substitute teacher to become a reality. I also drove straight from that job most days to an evening of clerking at Borders (RIP). In between I ate fast food in my car.
I think kids today have grown up hearing about the crummy economy so much they are probably less deluded about how tough it can be out there. So, if they do end up having to move back in with their parents, like I did, at least it won’t come as a complete surprise.

5. Technology
This one is sort of Captain Obvious. None of my students seem all that enthralled with the epic story of how I navigated all of college with only a Smith Corona Electric Typewriter, though, so I won’t recount it here. I'll only say, young ones of today, before you tell your teacher about your computer problems, just imagine trying to move blocks of text while squinting at a four-line liquid-crystal display, or pressing the up arrow for about half an hour if you forgot your heading.


On Friday, April 5, my school hosted my launch party for THAT TIME I JOINED THE CIRCUS--and it was awesome! So many people turned up...we had a balloon twister, acrobat, and some amazing face painting. The circus snacks included hot dogs and popcorn. I signed so many books--and no one said no to a circus sticker! 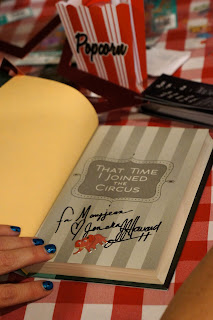 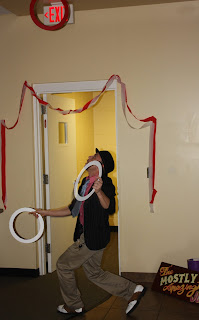 Email ThisBlogThis!Share to TwitterShare to FacebookShare to Pinterest
Labels: 2013 debuts, circus, scholastic, That Time I Joined the Circus, ya, YA Lit
Newer Posts Older Posts Home
Subscribe to: Posts (Atom)